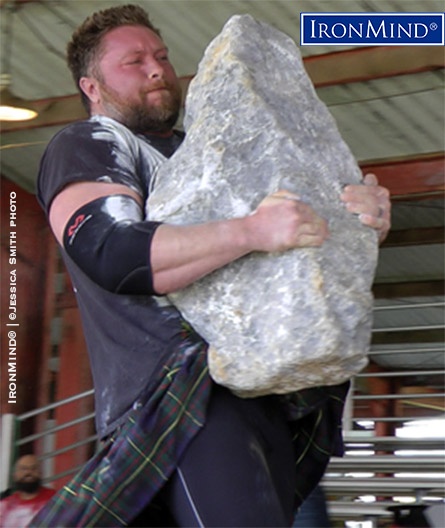 What better way to add some spice to a logging conference than to include an IHGF Stones of Strength and Strongest Logger competition?

The Sierra Cascade Logging Conference in Redding, California was the major sponsor of two events: the first leg of the IHGF All American Stones of Strength qualifying series, followed the next day by the Sierra Cascade Strongest Logger. In a perfect setting at the Shasta District Fairgrounds, in Anderson, California, huge crowds packed the arena seating, and young and old cheered on the strength athletes throughout the competitions.

Casey Garrison, who sustained a biceps tear at the beginning of last year's season, was back, leaner, stronger, and faster at a bodyweight of 295 lb., and it showed in this first IHGF Stones of Strength qualifier. Just a few months prior, Garrison won his pro card in America's Strongest Man, placing second overall.

Four events made up the Stones of Strength qualifier, starting with the 95-lb. Stone Throw. Garrison opened with a throw of 14' and never looked back, increasing his lead in every round with a best of 16' 2", a new American record. Second was Nyck Romero with a respectable throw of 12' 5", and third, James Richards with 12' 1".

The Sierra Cascade Strongest Logger was impressive to watch, as newly turned strongman pro Mike Stroozas made his debut and a huge impact, winning almost all the events. This competition was also a qualifier to compete this summer, along with Garrison, in a major championships event in Europe. The Strongest Logger contest included 4 events, testing athletes to the max of their strength and conditioning.

In the challenging Log Lift, athletes lifted from the ground and pressed overhead a log weighing 280-lb., increasing 20 lb. each round. At 300 lb., 3 men succeeded, Stroozas, Romero and Salter, who progressed to 320 and 340 lb. Only 2 pressed the 340-lb. overhead with Romero giving it all he had and Stroozas using pure shoulder power. At 360 lb., Stroozas come very close to locking it out but the event ended in a tie.

To the cheers of the spectators in the Timber Frame Carry, athletes carried a massive 850-lb. frame over a 60'-course in 60 sec. Stroozas knocked out a remarkable time of 10 sec. flat for the win. Romero took second at 14 sec. with Salter in third at 17 sec.

The Fingal's Fingers demanding on the athletes as they lifted and pushed over a series of 14'-long logs ranging from 380 lb. to 580 lb. Salter took the early lead, doing 2 logs in 31 sec., overtaken by Romero with 3 logs in 1.24 min. Stroozas followed like a caged animal, giving his all with 4 fingers in 1.17 min. to nail another win.

The Atlas Stones was the clincher for Stroozas, securing him the overall victory. Again, stones ranging from 250-420 lb. were lifted on plinths at the same heights as used in World's Strongest Man. Romero managed 2 stones in 29 sec. Tyler Shelgren did 3 stones in 59 sec., surpassed by Stroozas doing 4 stones in 37 sec. For Stroozas it was a sweet victory with a first-class performance all around. 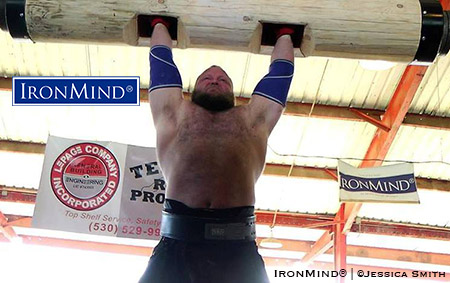