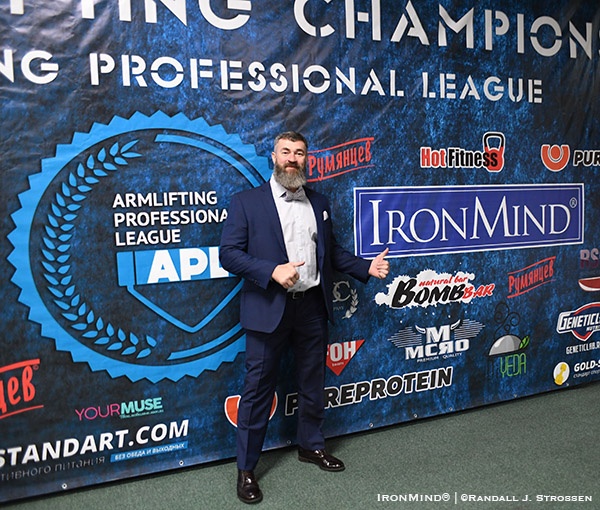 Sergey Badyuk, president of APL Armlifting, has a reason to be proud of the grip strength competitions his organization has presented. IronMind® | ©Randall J. Strossen photo

With an ever-expanding base of international athletes competing on a core group of benchmark grip events at the 2017 APL Armlifting World Championships, the future of grip strength competitions has never been so bright.

Competitors from well over a dozen countries gathered in St. Petersburg, Russia to see who had the deadliest digits—the kind of grip strength that goes beyond the ability to waltz through daily tasks and verges on or merges with bone-crushing power.  St. Petersburg is a jewel of a city whose location and heritage make it an ideal setting for such a prestigious grip strength competition.

It is fitting that Odd Haugen, who first pressed for a Rolling Thunder World Championships in 2000, was back in St. Petersburg 17 years later, competing at the highest levels—coming back to California with a haul of four gold medals and the spiritual leader of Team USA, which comprised himself, Clay Edgin and Riccardo Magni. Fellow North American Eric Roussin, the pride of Canada, proved once again to be a spirited, capable competitor, who’d also have been in the running if they'd had a “best forearms” category.

Armlifting began in 2010 with one discipline, the Rolling Thunder, and after years of successfully following this format, the competitor program was expanded to include the additional pillars of the grip strength community: the CoC (Captains of Crush) Silver Bullet Hold, and the IronMind Apollon’s Axle double overhand deadlift, along with the IronMind Hub. Further additions have been the APL Excalibur and the APL Saxon Bar.

Under the energetic and visionary leadership of Sergey Badyuk and Dmitriy Suhovarov, the APL has taken armlifting from being an add-on to being center stage, and each year they have taken the sport to another level. Their seriousness, as well as their success, is apparent in such features as an attempt board and refereeing system parallel to what is used in weightlifting, and it is no accident that their model is based on that Olympic sport.

And speaking of referees, the officiating is solid, as would become a world class event—you won’t find events tailored to the organizer or the fast down signals that undermine the credibility of some grip contests. Instead, the APL recognizes that legitimacy is the true source of strength and the contests are run to reflect this philosophy. Also, the focus on inclusiveness is mirrored in multiple body weight and age groups, for both men and women.

Lolyta Sevlikyan (Ukraine) won the women’s division, holding the CoC Silver Bullet with a Captains of Crush No. 1 gripper for 37.47 seconds.

The Rolling Thunder highlights included Alexander Filiminov breaking his own teenage world record with a lift of 98 kg. Incidentally, Filiminov is expected to compete in Odd Haugen’s grip contest at the Los Angeles FitExpo next January.

And speaking of Odd Haugen, after having a rough time competing on the Rolling Thunder as a Master 50+ in the morning (bombing out with 105 kg), Haugen roared back in the Open class and won with the same 105 kg. Eric Roussin—who left with so many medals that my arms got pumped putting them around his neck during the awards ceremony—hit a very nice 103 kg as he won the men’s Open 90-kg class

The IronMind Apollon’s Axle double overhand deadlift is a bedrock event in the grip strength world and while nobody pressed the world record there were some impressive performances: Julia Podryadchik (Russia) pulled 100 kg in the women’s -80 kg category, junior Oleg Makarov (Russia) hit 185 kg (at a body weight of 101.7 kg), Dimitriy Burakov (Russia) won the men’s open 90-kg class with a lift of 192 kg, and Sergey Kiliasov (Russia) made 213.5 kg as a 110-kg competitor.

Odd Haugen posted the highest overall lift on the APL Saxon Bar (a two-hand pinch grip), with a 110-kg success, and Anastasya Ivchenko (Ukraine) won women’s open class with a lift of 50 kg.

Already gearing up for something even bigger and better next year, Dmitiry Suhovarov reflected on this year’s competition: "It was a great contest, we have a 20 new APL world records in bodyweight classes and also one overall IronMind world record (teenage Rolling Thunder) and one more Captains of Crush No. 3 certified Russian. It was an honor for us and all competitors to stay and compete in one hall with legends like a Odd Haugen and Randall Strossen. It was a pleasure for us to create this competition.” 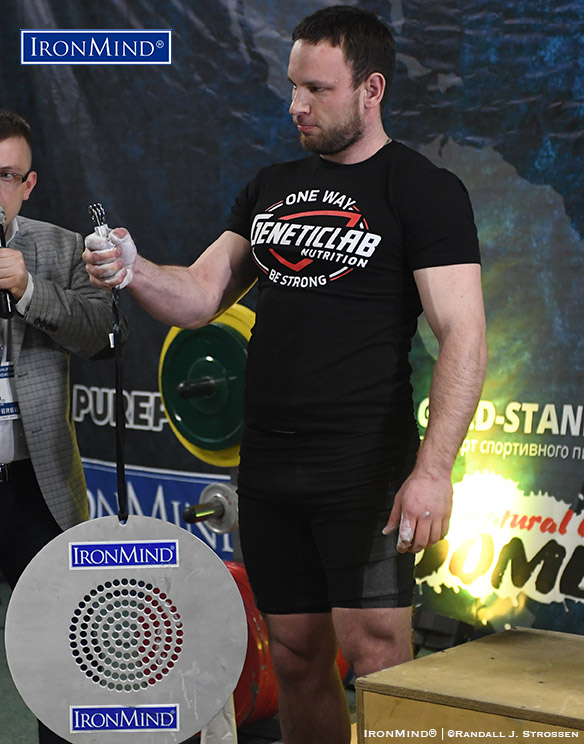 Dmitriy Suhovarov (Russia) was the CoC Silver Bullet champion on both the Captains of Crush No. 3 and No. 4 grippers. IronMind® | ©Randall J. Strossen photo 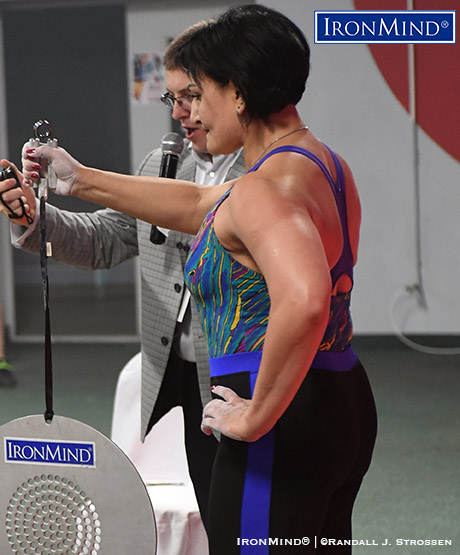 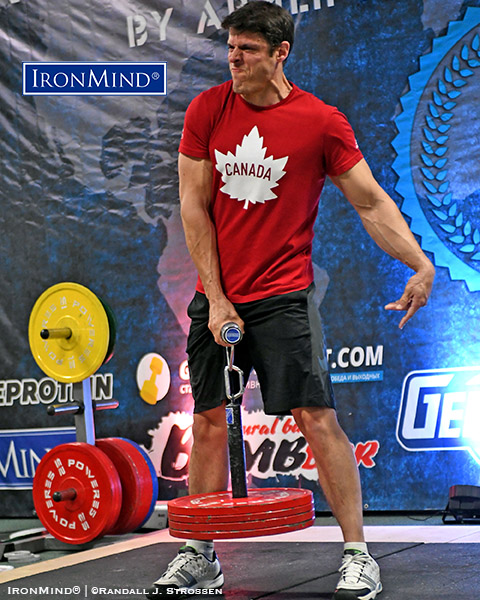 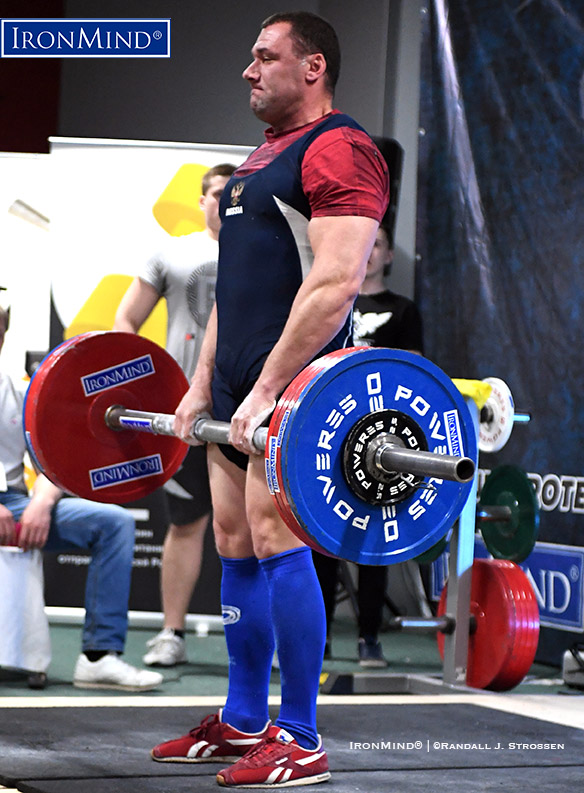 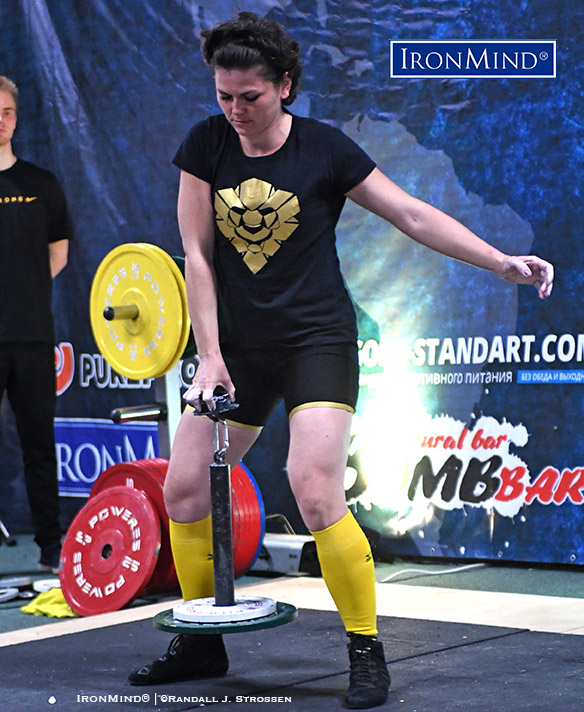