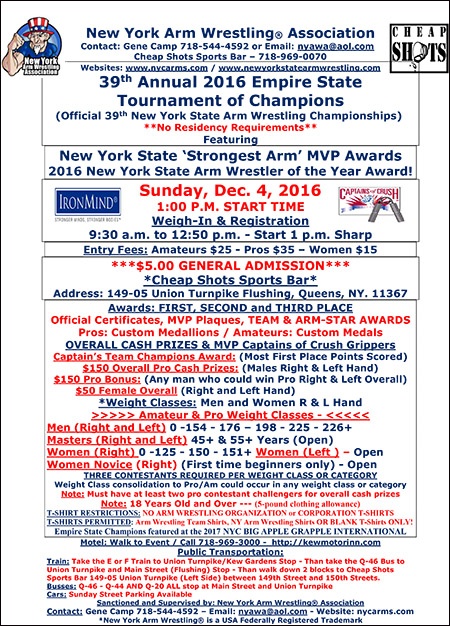 Who’s got the strongest arm in New York? Come to Cheap Shots (Flushing, New York) on December 4th and find out. IronMind® | Courtesy of NYAWA

Think you’ve got the strongest arm in New York or want to see who does?

“Over $3,000 in cash and prizes will be given out and over 100 men and women are expected to compete for the chance to be crowned New York State Strongest Arm.  The event is divided into right and left hand weight class categories for men and women in pro, amateur, masters 45+ and 55+ years old.

“The New York State Strongest Arm MVPs (overall male and female, right and left hand winners) receive cash prizes and awards are given for first, second and third place in all weight class categories. Teams will also compete, grouped by Borough, State, and Country, with a point tally to determine the winning team prize. Captains of Crush Grippers® will be presented to New York State overall winners.

“‘This event as the culmination of the 2016 NYAWA season and very exciting to watch because it is loaded with top talent locally, from all over the tristate area and far beyond.’”

“Some of the city’s best arm wrestlers are expected to compete—among them, the winners of the prestigious 2016 NYC Big Apple Grapple International and last year’s 2015 Empire State Champions will also return to defend their titles in this multi-talented high profile arm wrestling championship. Since there are no residency requirements, contestants and teams are expected locally from the five NYC Boroughs, Long Island and from as far away as Russia, Brazil and Turkey and other foreign lands.”