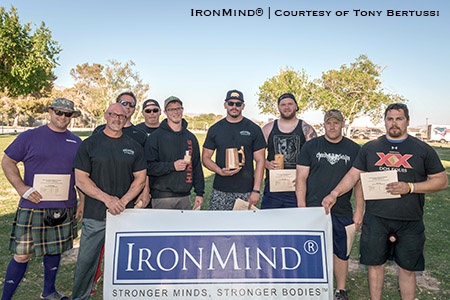 The 12th annual Las Vegas Highland Games this past weekend attracted large entries in the novice, women’s, masters’ and amateur men’s A, B and C divisions, a total of 115 athletes over the two days of competition.

Farr, who won last year’s title of IHGF World Lightweight champion in Gyor, Hungary, has now moved up to the open class and has considerably increased his weight and strength overall. Farr, a former track and field athlete before competing in Highland games, put up a topnotch all-round performance, winning four of the nine events but losing vital points in the caber, which cost him the top podium finish and qualification for the All-American Championships in this first leg of the series.

In the 22-lb. Braemar stone, you could feel the electricity, and it continued throughout the competition. Farr dominated from the start and produced a best of 38’ 7-1/2” for the win; second place was a scuffle, with E. Brown pulling out his best in the final round at 36’ 8-3/4” to go ahead of Gilmer at 36’ 7”.

In the 22-lb. heavy hammer, Farr come back with all pistons firing and bombarded the field with a hail of class throws, with a best of 94’ 9” for the victory. Hand come into his own as well, placing second at a distance of 91’ 1” to third-place Chisholm at 90’ 1”.

The 56-lb. weight-over-bar was an impressive coup for E. Brown, who slugged it out with Gilmer, both clearing 16’ and coming very close on 17’. E. Brown won on countback (fewer misses), leaving Gilmer in second. Both Hand and Anthony cleared 15”, with Hand claiming third place on countback.

In the final event, the 20-lb. sheaf-over-bar, Hand and Gilmer dueled mightily, ending in a tie at 29’ and Hand taking the win on countback. Third place was a tie between Chisholm, Thompson and Farr.

Once all the points were tallied, E. Brown was the overall champion, and both he and Gilmer qualified for the IHGF All-American Championships at the McPherson Highland Games in September.

Athletic director Gordon Lawes and SAAA president Doug Mostyn were delighted with the number of overall entries for the games and being part of the IHGF All-American Highland Games series.

The next qualifier in the IHGF All-American series is the Wichita Highland Games & Celtic Festival, 23–24 April, Wichita, Kansas.