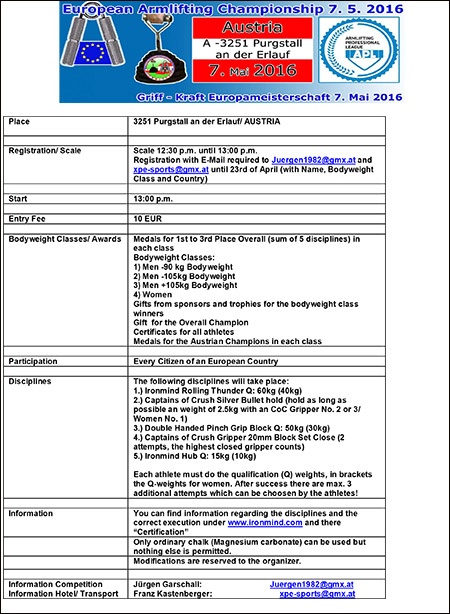 The 2016 European Armlifting Championships will be in Vienna, Austria on May 7 and will feature the core grip strength disciplines of the Rolling Thunder and Captains of Crush (CoC) Silver Bullet Hold, with three bodyweight classes for men and an open women’s class. IronMind® | Courtesy of Juergen Garschall

Juergen Garschall has announced the 2016 European Armlifting Championships, which he will be hosting in Vienna, Austria.

“I am happy to host this competition as it is also official approved from the APL (Armlifting Professional League),” Garschall told IronMind.

“I want to say that every athlete from Europe (it doesn't depend on the membership of any organization) is invited to take part here. The only limitation is, because we as Austrian Armlifting Federation stand for a clean strength sports, therefore we don't want doped athletes to compete at our championship!

“I am looking forward to a great competition with many athletes from different countries!

“I plan also to travel with an Austrian National team the week afterwards to the Armlifting World Championship in Saint Petersburg, Russia,” said Garschall.