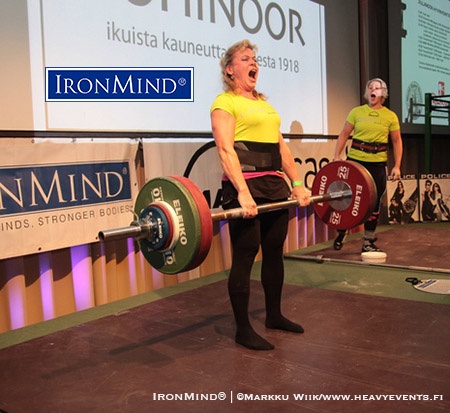 The competition is over and it was wonderful day with athletic performances full of energy.

In the women's class Jaana Tanner edged out former IronMind Grip Classic winner Anu Rytkönen and Leena Nurminen in the tough competition. Jaana produced a new Finnish record of 109 kg in Apollon's axle and we also sending material for IronMind to check if our Block results will be taken as a new world record for women.

In the men's class we had 9 men from 4 different nations and in the end the first world champion under our anti-doping programmed system was Norway's Eirik Bruun Ingebretsen, who edged out Juha Lehtimäki and Jouni Mähönen by a few points.

One of the dark horses of the competition was Niko Laine from Finland—Niko is the reigning world champion in -90kg class in WHEA strongmen and even without testing half of the events, he won one event and took 5th in overall.

The competitors were really happy about the day and we are waiting to see more competitors and countries in for 2016 version of US World Grip Championships.

The day included also Diamondgirl™ competition, which was won by Maria Juvas and 1st Finnish Mas-Wrestling championships with winners of Roland Wahlsten and Jaana Tanner.