“A major IHGF stone lifting competition is being scheduled to take place in Scotland between the 19th and 20th of June this year to see who can officially walk the farthest with both of the Dinnie Stones at the same time,” IHGF president Francis Brebner told IronMind today. 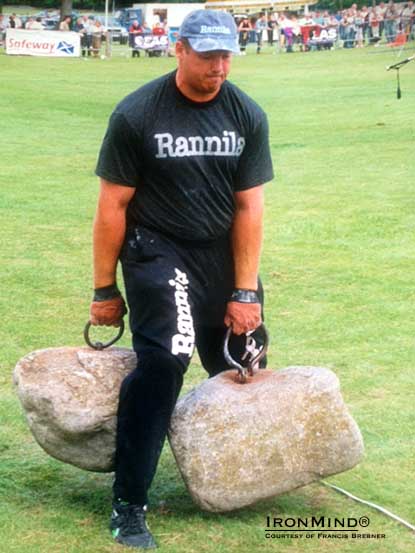 Callum Morrison, one of the few men in the world to walk with both Dinnie Stones at once.  IronMind® | Photo courtesy of Francis Brebner.


“In 1997 Callum Morrison of Aboyne was the first person on record to officially walk with both stones at the same time a distance of 2’ which Callum then later increased this distance to 5‘ and  the official record is currently held by Glenn Ross of Ireland with a distance of 5’ 5” set in 2001,” said Brebner.

“A memorial trophy in tribute of Callum Morison who passed away last year at the age of only forty eight will be awarded in this particular event for the athlete that can walk the farthest with both stones at the same time.
“Other stone events to be included also, athletes competing to be released on IronMind, a few more spots are still open for competitors   . . . this event will be filmed for European TV,” said Brebner.