“Today started with the Finland´s Strongest Woman contest for 2013 and the fresh Scandinavian Champion Kati Luoto took her 7th national title, taking only 3 of the six events,” Jyrki Rantanen reported to IronMind. 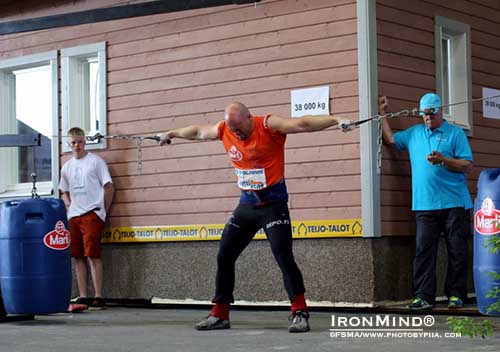 Under 105 kg and overall points winner Janne Hartikainen in the Hercules hold. Behind Janne is the house the ladies pulled, all 38,000 kg of it..  ©Finland´s Strongest Man Association/www.photobypiia.com.


“Second spot was Alina Leisiö,  with better event placing than the newcomer Sonja Ekdahl, who tied the points with Alina.

“In men´s finals, the 105´s started the day and there was good battle behind the 3-time World Champion Janne Hartikainen, who now took his 8th lightweight national championships title.

“In Open class Jarno Jokinen edged out Mika Jaakola by better placings and took his third title in a row.

“And as a test we introduced an overall title, where all the results were counted together from both days, with both classes and for 2013 the overall top three were:

“In total we had 21 men and 7 women competing and the race was the tightest ever as there were so much ties, one-second differences,etc. . . . something that the over 1000-people crowd enjoyed.

“The competition was held in Teijo-Talot Oy house building factory in Perniö, Finland and this awesome arena with the opportunity to pull a house is the location for next year's contests also," said Rantanen.