Sanya, China - With the start of the 2006 MET-Rx World's Strongest Man finals less than twelve hours away, thoughts are already turning to the outcome and for some insight, IronMind® turned to the High Council. 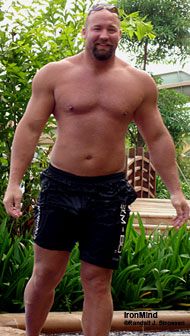 Don Pope looked impressive in the qualifiers and he's getting votes as the favorite on the overhead stone lift . . . the third event on the first day of the WSM finals. IronMind® | Randall J. Strossen, Ph.D. photo.

Defending champion Mariusz Pudzianowski is considered the clear favorite for this year's title and the High Council raised the possibility that there could be a Polish sweep, given how strong the entire Polish contingent looked in the qualifiers.

Day one action begins with the deadlift for reps, and Mark Felix is seen as the man with the best chance of bringing home the bacon in that event. Next, the power stairs seem to have Pudzianowski's name with the most likely claim on first place. And for the final event on the first day - overhead stones - Don Pope is getting the nods.

But it's all conjecture at this point and when the dust settles after the first day, all the pre-contest probabilities will go out the window. And as for how the competitors feel, Terry Hollands probably summed up a common sentiment, saying that he'd rested long enough, was starting to get bored and he "just wants to get started."

Place your bets now and stay tuned for the results.