The new date tentatively reported for the 2005 Asian Weightlifting Championships several weeks ago is official. 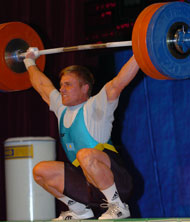 Originally scheduled for June 15 - 22, the competition is now set for September 23 - 30 and it is still being held in Dubai, UAE.

In addition to its stature as a continental championships, the Asian Weightlifting Championships has produced some of the sport's top performances in recent years.