It's official: UNLV strength coach Mark Philippi has been invited to the Arnold Strongman contest. 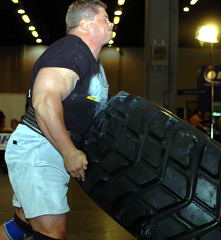 Terry Todd, who heads the Arnold strongman contest, said that he had conferred with David Webster and Bill Kazmaier, and there was strong agreement that based on Mark's performances at the 2004 Arnold (which included winning the prestigious Hummer Deadlift event) and at the Nationals (where he produced another solid performance), he should be included in the 2005 event, which will feature a top-flight field of strongmen.

After Bill Kazmaier retired from strongman competition, there was an extreme shortage of Americans competing in the top events, but then Phil Martin made a big splash in 1995 and then within another two years, Mark Philippi was making a name for himself on the international circuit, earning some real respect for American strongmen.