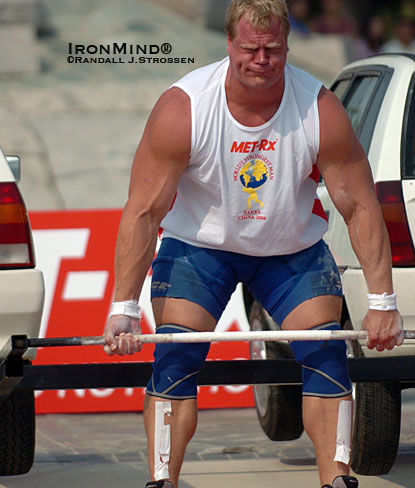 Supersized Phil Pfister, 2006 MET-Rx World’s Strongest Man winner, has the sort of frame and skill set that are well suited for the intense, all-around challenges posed by the WSM contest.  Although some smaller guys have won the contest, the nature of its demands makes this contest the special domain of the truly big and strong—guys who can, for example, deadlift two cars for reps, on demand.  IronMind® | Randall J. Strossen photo.


Let’s talk strength for a moment, forgetting about mind-numbing discourses best suited for readers of strength lore and focus instead on what virtually all practitioners and experts would agree take the measure of a man’s strength . . . things like squats, deadlifts and overhead presses.  And because this is strongman, let’s be sure to include stones and a farmer’s walk, for example, and let’s use an actual log for the overhead lift.

How about squats and deadlifts for reps, looking at about 340 kg in the qualifiers and then +350 kg in the finals, reminding everyone once again that none of these numbers is official, that WSM officials will announce the actual weights at the time of the final event testing and that events are always subject to change.

Incidentally, Gregor Edmunds is chief of equipment for the MET-Rx WSM 2010 contest, so World’s Strongest Man will once again benefit from having someone bearing a long, close, illustrious association with the contest overseeing this vital function.

Although again unofficial, IronMind® has been tipped that the Atlas stones will range up to 190 kg “on to the highest platforms in the world,” and there is a clear sense that the grandest stage in strongman is being set for an assault on the world record in the log lift.

IronMind® has also heard that the farmer’s walk implements will be in the range of 160 kg, there is talk of a 95-kg dumbbell, and more, so stay tuned and keep your eye on the official MET-Rx World's Strongest Man website.

“This show is designed to find the strongest man in the world.  Thus we cover all the major areas deemed necessary to bestow such a great title on someone.  WSM is the original and still the best.  It’s the one that has lasted 30 years and will be here in another 30.