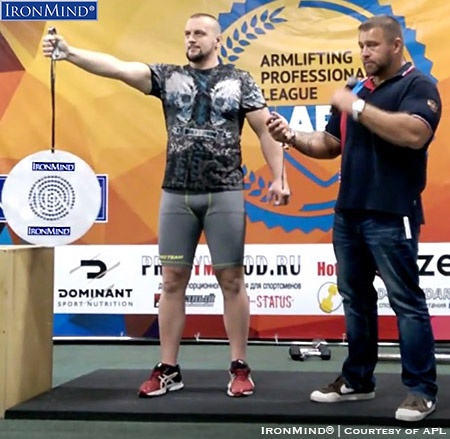 CoC-3 ’15 Nikolay Pleshakov won the CoC Silver Bullet with an impressive time of 44.9 seconds at the 2017 APL Russian Armlifting Championships, edging second-place finisher Alexander Faustov by less than half a second. IronMind® | Courtesy of APL

“Step-by-step, APL is going from fun to a professional sport and we are trying to create the highest-level competition ever,” Dmitriy Suhovarov told IronMind.

Speaking of the recent Russian Armlifting Championships, Suhovarov said, “This time, we provided a few new and important things: first, we are starting to provide a show between the competition rounds: we organized a pole-dance, cheerleading, etc. Second, to create more interest for the sportsmen, we are starting to pay cash money in prizes. We hope this will be a next-level of our sport’s popularization.

“In near future, we will have a lot of fitness expos, where we will introduce armlifting and IronMind grip tools, and of course we have started preparing the World Armlifting Championships and are looking forward to see all you here,” said Suhovarov.

Now, one week later, Suhovarov reported, “Ohhhh…I'm coming back after 3 days at a fitness expo. We had a great show: at our booth, we consolidated armlifting, sports nutrition and a pole-dance show.

“So, in these days, over few thousand people have tried these IronMind grip tools: Rolling Thunder, Hub, Twist Yo’ Wrist and of course, the CoC Silver Bullet,” said Suhovarov.

Suhovarov, incidentally, is not merely an armchair promoter with no active involvement in grip strength sports themselves: he is the current world record holder on the prestigious Captains of Crush (CoC) Silver Bullet Hold.

Armlifting began in 2010 when a Russian colleague approached IronMind, requesting permission to hold grip contests under the armlifting banner, using the Rolling Thunder. And while the Rolling Thunder remains the sport’s signature event, the Captains of Crush (CoC) Silver Bullet Hold and the Apollon’s Axle double overhand deadlift have been added to the program.

Armlifting began with a single event—the Rolling Thunder—which remains the foundation of the sport, and it has expanded to also include the Captains of Crush (CoC) Silver Bullet and the Apollon’s Axle Double overhand deadlift, which are staples of the grip strength world,

Here are the top three from the 2016 Russian Armlifting Championships, courtesy of Dmitriy Suhovarov, APL. 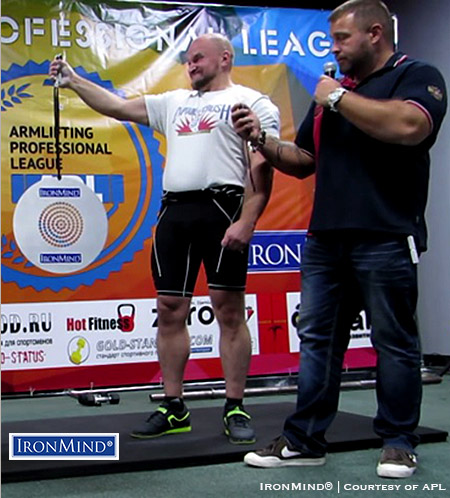