“We had two days of competition in a very sunny Gibraltar, where Zydrunas Savickas was the SCL King,” Marcel Mostert reported to IronMind. 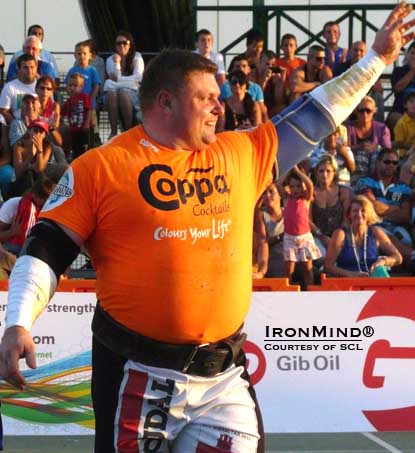 
“The stage was sold out, the crowd was amazing enthusiastic, and Zydrunas Savickas won another Coppa Cocktails Strongman Champions League contest, the SCL GIBRALTAR.

“But this weekend he ruled like a king —10 points ahead of Lauri Nami and 15 on Terry Hollands.

“He is in tremendously good shape at the moment and so ready for the World’s Strongest Man contest at the end of September in the USA, as this was his last SCL contest before World's.

“Lauri Nami and Terry Hollands, coming in second and third at SCL-Gibralter, sare both competitors in WSM this year as well.

“Local hero, Daniel Gracia from Gibraltar came in 9th place in his first SCL ever.  He did very well, and the crowd absolutely loved him!  Matt Wanat from USA was more unfortunate, he pulled his biceps in the wine barrel loading.

“It was a hard fight for everybody, but a very pleasant stay there as well, and Gibraltar wants us already back in 2013 and 2014,with an even bigger setup than this year,” said Mostert.

The next stage of the Coppa Cocktails Strongman Champions League will be at 15 September in Turkey.