Shortly after winning the 2008 Strongman Championships League World Log Lifting Championships, Zydrunas Savickas - widely considered to be the strongest man on the professional strongman circuit - told IronMind® that he has not yet decided whether or not he will compete in the 2009 Arnold Strongman contest. 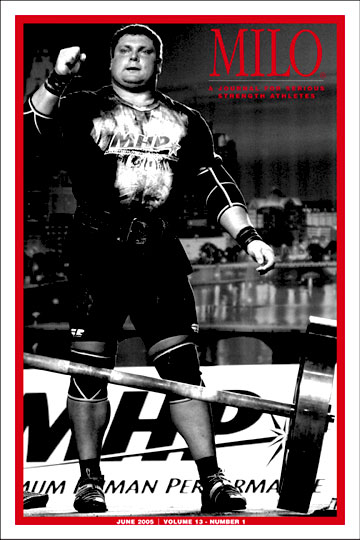 It's a familiar image - Zydrunas Savickas winning at the Arnold Strongman contest. So far, the Lithuanian strongman star has notched up six victories in a row, but will he back for a possible seventh in 2009? IronMind® | Image courtesy of IronMind® Enterprises, Inc.

Asked about his victory at the inaugural Strongman Champions League World Log Lifting Championships earlier today, Zydrunas Savickas told IronMind®, "I am happy that I won the competition. All athletes were in good shape [and produced] good results." Commenting on his attempt with 212.5 kg, Zydrunas Savickas said, "New world record was very close, but . . . next year, next time."

And speaking of what's next, Zydrunas said, "At this moment I do not think about my next competition. I want to have a rest, because I five years compete without break." And when asked specifically about the 2009 Arnold, Zydrunas Savickas said, "I [have] not decided about next Arnold. [I will] decide in December."