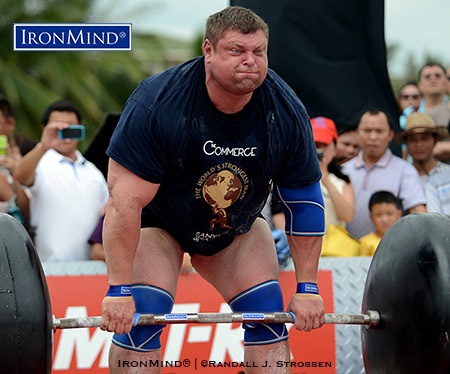 Zydrunas Savickas, shown deadlifting at the 2013 World’s Strongest Man contest (Sanya, China), is the greatest strongman of all time according to the ratings and rankings just released by Fortissimus World Strength. IronMind® | ©Randall J. Strossen photo

Fortissimus World Strength has named Zydrunas Savickas (Lithuania) as “the greatest ever strongman,” based on its extensive survey and rating system.

Following is the statement, from Fortissimus World Strength.

With 11 450 total points at stake, Zydrunas Savickas from Lithuania , winner of 4 WSM, 8 Arnold Strongman Classics, 2 IFSA World Championships, 1 Fortissimus title, 1 Giants Live championship, and 89 other international Strongman victories, stands out as the greatest strength athlete ever, scoring 4612,5 points , a share of 41,2 % of the overall point system.
The Lithuanian powerhouse ,  now 25 years competing in sports of strength ( he entered 204 Strongman contests), earned 18 Strongman world titles and, at one point or another, established 57 world records ( he improved the log lift world record alone 18 times).

Runner-up on the all-time Strongman honor’s list is Mariusz Pudzianowsi from Poland. The most charismatic strength athlete ever, winner of a record 5 WSM titles and of 42 out of the 59 international Strongman contests he entered, earned 1645 points , a share of 14 % of the total points awarded.