Tel Aviv—Looking at the start list for the 94-kg category at the 2014 European Weightlifting Championships, Adrian Zielinski stood out as the likely winner, and he was, but what of his younger brother, Tomasz, and the still younger Bulgarian lifter, Vasil Gospodinov? 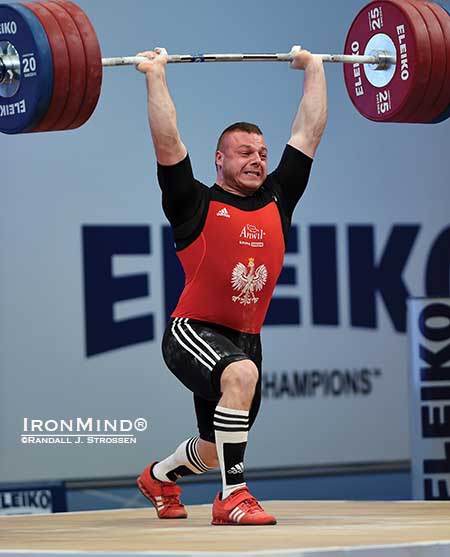 After making a solid clean, Adrian Zielinski missed the jerk on this 215-kg third attempt, but by then he had already won the snatch and total gold medals in the 94-kg class at the European Weightlifting Championships.  IronMind® | Randall J. Strossen photo


Both Zielinski brothers are solidly built, while Gospodinov looks tall and rangy for a weightlifter, but looks aren’t part of the equation in this sport.

Gospodinov took 195 kg for his first clean and jerk—good lift—and then made another good lift with 201 kg on his second attempt.  Both Zielinski brothers had good openers with 205 kg.  When Gospodinov made the same weight on his third attempt, you could feel the lifter’s excitement and remembering his age, sense that he has a big future.  Meanwhile, both the Poles would go on to make 210 kg on their second attempts and both would miss 215 kg on their third attempts—Adriane missed the jerk and Tomasz only deadlifted the weight.

Adriane Zielinski is the king, but his younger brother isn’t exactly shrinking in his shadow.  And with the fire displayed by Gospodinov as he went six for six, keep an eye on this class because a podium shakeup could well be on its way.