Chiang Mai, Thailand - Some thought he might be too old to compete in Beijing next year, but don't tell that to Zhang Guozheng (China), as he won the 69-kg category at the World Weightlifting Championships tonight. 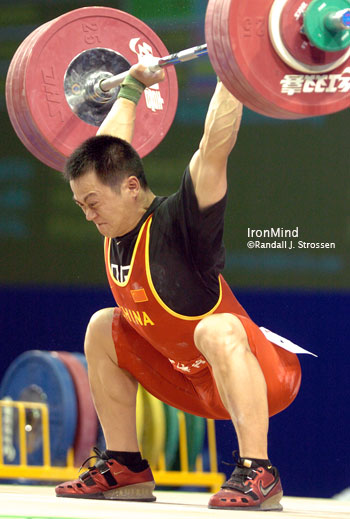 Zhang Guozheng (China) hits the bottom with this 192-kg jerk in the 69-kg category at the World Weightlifting Championships, where he won the gold medals in the jerk and in the total tonight. Notice that he is wearing the new Nike weightlifting shoes that Tom Hirtz has been predicting. IronMind® | Randall J. Strossen, Ph.D. photo.

Lee Bae-Young (Korea) should have been a factor in the medals tonight, but he bombed in the snatch, missing 150 kg three times. Vladislav Lukanin (Russia), a solid gold medal candidate, also could have used a visit from Lady Luck, because after blowing up 147 kg on his opener, he dislocated his arm on his second attempt, 152 kg, and Dr. Shahabi got number 26 on the books.

Shi, the super snatcher, followed with the same weight on his opener and he made a good lift. Demir Demirov (Bulgaria) missed 153 on his second attempt, but then he came back and made it. Mete Binay (Turkey) made the same weight on his third attempt, to move into the lead on bodyweight, but it wouldn't last long, as Zhang hit 155 on his second attempt, on a two-to-one ruling - his right arm looked a little spongy on the lift.

Zhang sent 156 up and over on his third attempt and Shi missed 158 on his second attempt, but he repeated and made a good lift for the gold medal in the snatch.

In the end, it was all Zhang Guozheng, who made 184, 189 and 192. Defending world champion Vencelas Dabaya (France) salvaged some glory, as he got the silver in the jerk with 187.

Shi got the silver in the total with 338 kg, and Demir Demirev got the bronze with 334 kg.