Chiang Mai, Thailand - Natalia Zabolotnaya (Russia) sailed through three good snatches tonight - 124, 127 and 131 - tonight at the World Weightlifting Championships and the last one broke her own world record in the women's 75-kg category. 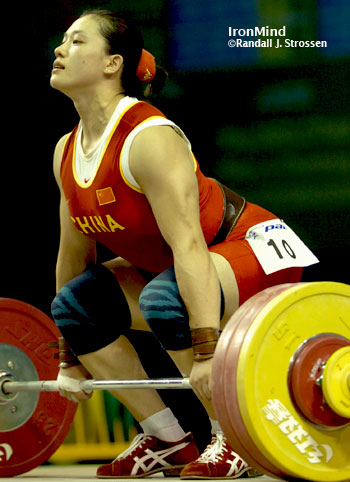 Continuing to hunt for the record book, Zabolotnaya took 156 on her second clean and jerk, looking for gold medal position in the jerk and the total, plus the world record in the total. After cleaning it pretty easily, she dumped the bar and seemed to be indicating that she was passing out. Repeating with the same weight on her third attempt, she missed the power jerk. Nadezda Evstyukhina (Russia) took 158 on her second attempt, going for the lead in the jerk and the total, but missed the jerk badly.

Cao Lei (China), who had gotten the silver medal in the snatch, took 158 on her second attempt, and made a very strong lift, to gain the gold medal position in the jerk and total. Evstyukhina jumped to 159 on her third attempt, hoping to leapfrog over Cao Lei, and although she missed the jerk, it was closer than on her second attempt.

Two golds and silver in hand, Cao Lei called for 160 kg on the last attempt of the class - it would have been good for a world record in the jerk and total, but after looking like she had racked the bar, she dumped it . . . Watch for this and maybe more in Beijing.