In another day when the red-hot performances matched the blistering temperatures, Phil Pfister, Mariusz Pudzianowski and Mark Felix led the way. 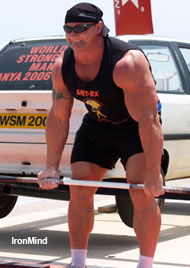 None of these results are official, but headlining today's performances, Phil Pfister set a new world record in the Fingal's Fingers, with a time reported at 32 seconds. This moved Mr. Pfister to second place overall in the group three, which is still led by Janne Virtanen - who continues to look impressive. Mariusz Pudzianowski banged out 17 reps in the car deadlift to maintain his lead in group one, and the young phenom Arild Haugen is in second place. Haugen, who is competing in his first World's Strongest Man contest, is off to a tremendous start. Jesse Marunde, with a great performance on the Fingal's Fingers, is in first place in group two, followed by Terry Hollands. The top two positions in group five remain unchanged from yesterday, with Sebastian Wenta in first place and Slawomir Toczek in second place. 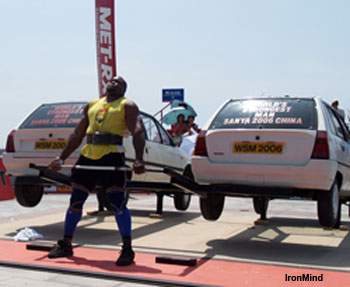 Mark Felix also knocked off an impressive 17 reps in the car deadlift today - not feeling that this was his limit, Felix reportedly said that he could have done the same number of reps with twice the weight!  IronMind® |