IMG’s Barry Frank started it to entertain people who had boring day jobs, but the World’s Strongest Man TV show went way beyond doing that—it inspired strongman as a unique sports-entertainment product, among other things, and while many me-toos have come along, World’s Strongest Man remains the category killer. 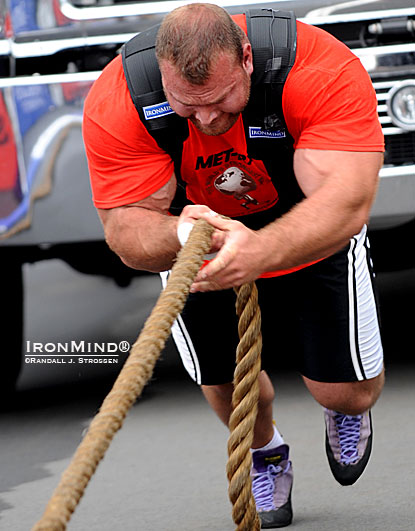 Derek Poundstone lives up to his name as he pounds toward the finish line in the Truck Pull at the 2011 MET-Rx World’s Strongest Man contest.  IronMind® | Randall J. Strossen photo.


The 2011 MET-Rx World’s Strongest Man contest was originally scheduled to be broadcast on ESPN beginning on January 1, but the new start date is January 14 (all times are EST):

The 2011 edition of World’s Strongest Man features the world’s top professional strongman competitors giving it their all in a mix of the classic events and some developed especially for this year’s show.

“My feelings about the World's Strongest Man in 2011 were that it surpassed all others,” Colin Bryce told IronMind.  “Not just in terms of excitement, which it has in abundance, but also in its quality of athlete: Never before have so many men been in such great shape.  The top ten took it to another level.”

Bryce was not alone in praising WSM 2011, as this is how Derek Poundstone put it:

“WSM upped its game this year.  This was the most amazing display of strength ever put on . . . It was an awesome competition and I was honored to have been a part of it.”

“It was stunning and as Head Referee,” Bryce told IronMind, “I was extremely honored to be a part of it.  When setting the events with WSM Equipment Manager Gregor Edmunds, I often thought we had gone too far with the weights and measures, but time and time again the men amazed us all with world records and extreme human achievement.

“If you are a strongman fan then you cannot miss this year's shows,” Bryce said.