IronMind® has just received word from someone close to the negotiations that IMG is “working with a new licensing partner . . . to help promote and raise the profile of WSM [World’s Strongest Man].” 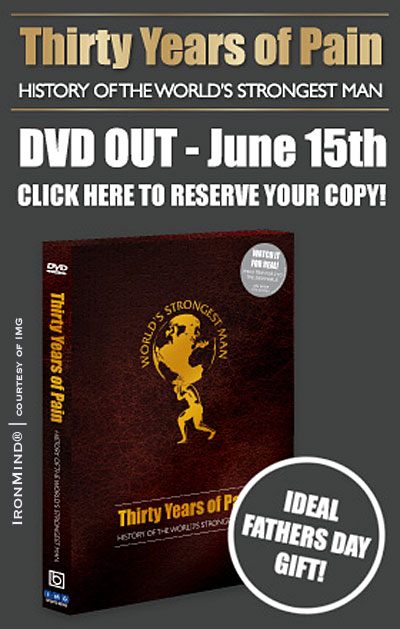 Explaining further, “To start with, they have released the Thirty Years of Pain on DVD – which is great news and the first of many we hope.”

"Released on DVD on 15 June 2009, Thirty Years Of Pain is a fascinating documentary which follows The World’s Strongest Man competition from its very first event at Universal Studios California right up to the 2008 finals in Charleston, West Virginia.  Bringing the action to life are interviews with some of the competition’s biggest names, including Bill Kazmaier, Geoff Capes, and Magnus ver Magnusson, as well as the event’s founder, Barry Frank.

"In addition to the main programme, the DVD offers an exclusive special bonus feature, ‘The Making Of The World’s Strongest Man’, which takes fans behind the scenes of the 2006 WSM Finals as contenders prepare for this gruelling contest.  Pre- and post-event interviews with athletes are also featured, including Mariusz Pudzianowski, Magnus Samuelsson and Britain’s Terry Hollands.

"Purchasers of the Thirty Years Of Pain DVD will also have the chance to enter an exclusive competition to travel to the finals of the 2009 World’s Strongest Man competition in Charleston, West Virginia.”