"Wind-up Records and IMG Media have just announced the release of the inaugural soundtrack for THE WORLD'S STRONGEST MAN franchise, airing on ESPN and ESPN2," according to an official IMG press release, with the title being available on Amazon, first, and, hopefully, on the World's Strongest Man website later. 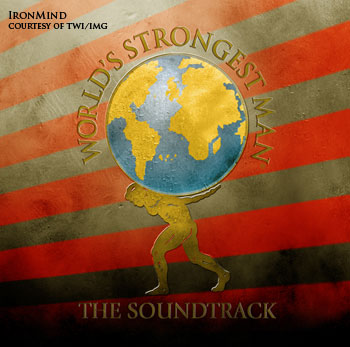 Following is the body of the official press release from IMG/TWI:

The 11-song release features the following track listing in running order: 12 Stones "Adrenaline," Korn "Hold On," Seether "Out Of My Way," Hatebreed "Never Let It Die," Shadows Fall "Redemption," Every Time I Die "We'rewolf," Underoath "Writing on the Walls," Submersed "Better Think Again," Mastodon "The Wolf Is Loose," Hurt "Ten Ton Brick," and "Strongman" (The World's Strongest Man Theme) performed by Bruce Aronson. The selection number for this release is 60150-13139-2.

The compilation was produced by Wind-up Records' Bill Richards and Gillian Morris, alongside IMG Media's Steve Mayer and John Sands who are executive producers on the project. John Babbitt from Tsunami Entertainment served as a consultant.

12 Stones' "Adrenaline" will be the theme song for this season. The Mandeville, Louisiana-based quartet signed to Wind-up Records was filmed recently in Baton Rouge, and this footage will be cut into the program as the opener of each episode. The individual episodes will also contain a thirty second music video of each individual track featured on the soundtrack utilizing scenes from the competition. The artist and label will be chyroned on-air.

Steve Mayer, IMG Media's Senior Vice President, U.S. Production said, "The World's Strongest Man competition is one of IMG Media's most popular and longest running global television events. We are so gratified to be working with Wind-up and all the talented artists on this soundtrack project. It is our hope to expand the visibility of The World's Strongest Man and this music is a perfect partner for this high-energy sports show."

Wind-up Records SVP, Marketing Bill Richards shared, "The World's Strongest Man is a powerful brand in the marketplace that we are thrilled to be a part of. The Wind-up acts, and those on other labels, were all excited for the opportunity to be a part of this. IMG Media is a great company, and we look forward to additional initiatives in the future."

The 2008 season of The World's Strongest Man will premiere on December 26, 2007 on ESPN2. From 6:00 p.m. until midnight that day, ESPN2 will broadcast a marathon of episodes from this year's competition.