The official start list and event schedule has been released for the 2010 World Strongman Super Series Mohegan Sun Grand Prix, a package that combines a premier strongman contest with a premier setting. 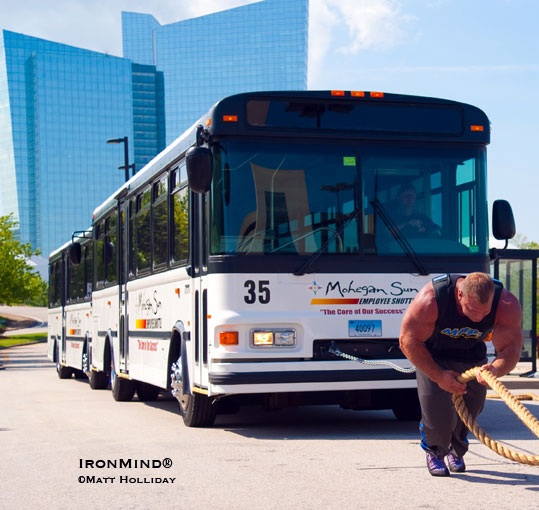 Derek Poundstone, a local cop and one of the world’s top professional strongman competitors, has a perfect record at the Mohegan Sun, but that doesn’t mean he can coast to another victory this year.  IronMind® | Matt Holliday photo.


The field includes some of the top names on the professional strongman circuit, including eight World’s Strongest Man competitors:

Since Odd Haugen is head of the competition committee, one wouldn’t expect this to be a series of foot races with featherlight weights—heavy is to be expected and heavy is what’s on the board:

At this point, the field will be cut to the top 6 competitors, who will go on to the final two events:

Derek Poundstone has a 2-0 record at the Mohegan Sun and he’s a local cop, so he has plenty of momentum coming into the contest.

“This is Derek’s home turf,” Haugen said when IronMind® asked how he saw the contest shaping up, “but nobody is coming here for second place.”  Poundstone, Shaw and Bergmann are Haugen’s top picks for the podium, but he was also quick to recognize the foot speed of Todorchev and the overhead power of Radzikowski.