Once again, the World Strongman Federation will be featuring some of the top names on the professional strongman circuit:

In addition, three more competitors are to be named, Redkin said, with one coming from Europe, one from Iran and one from Russia.

Also worthy of note is the location for this competition as it will be held in the new tennis center that was dedicated on September 24 in Khanty-Mansiysk (administrative center of Khanty-Mansi Autononomous Okrug): a nearly 16,000 square meter (over 140,000 square feet) facility that features seven tennis courts, and seating for 3,500 spectators around the center court. 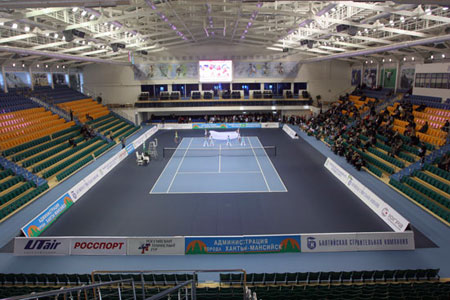 Here are the cumulative points for the top four competitors thus far in the 2007 - 2008 WSF World Cup season (ten contests):

"We plan to broadcast this contest worldwide on Eurosport!" said Redkin. And as far as a prediction goes, Redkin told IronMind®: "The fighting [battle] will be great of course - Mariusz, Janne, Elbrus, Dave or Tarmo?!"