On May 15, the World Strongman Cup is presenting "the first of an eight-part televised series" that will appear on Eurosport. 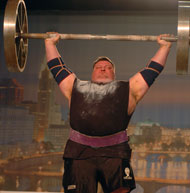 Former bodybuilder Glenn Ross (Ireland), who is entered in both of these World Strongman Cup events, made a big splash in his inaugural appearance at the Arnold Strongman contest earlier this year. IronMind® | Randall J. Strossen, Ph.D. photo.

This contest is set for Wexford Quay, in southern Ireland, and full details are available from Wexford Tourism. With competitors from around the world, and Bill Kazmaier refereeing, this should be a great event.

And on June 5th, at Nostell Priory, Wakefield, Yorkshire, the second big World Strongman Cup event in this series will be held.

Once again, an international field will be on hand, and none other than Gary Taylor will referee. In addition, this event is part of a massive sports festival that draws over 100,000 people, and the contest is being billed as "the first ever strongman International Competition for television in England."