Santo Domingo - Qui Hongxia (China) attempted a world record in the snatch on her third attempt in the women's 53-kg category at the World Weightlifting Championships today, but missed it - same setup in the clean and jerk, and this time, she got it. 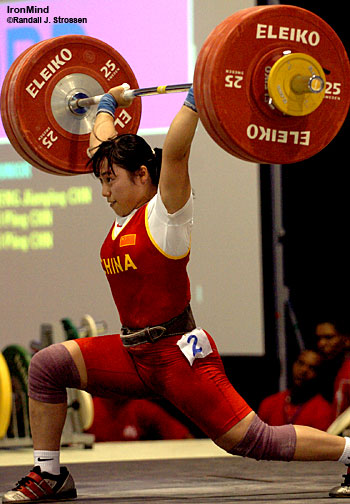 The other big news from this class is that Yuderqui Contreras (Dominican Republic) was chasing a medal and there was never any doubt of just who the large, very vocal crowd was there to support. In the end, all Contreras needed to hold onto her medal position was for Raema Lisa Rumbewas (Indonesia) to bomb, and she came close - missing the jerk twice on 115 and taking it to the edge of the platform on her third, for a two-to-one decision as she appeared to lose control of the bar.