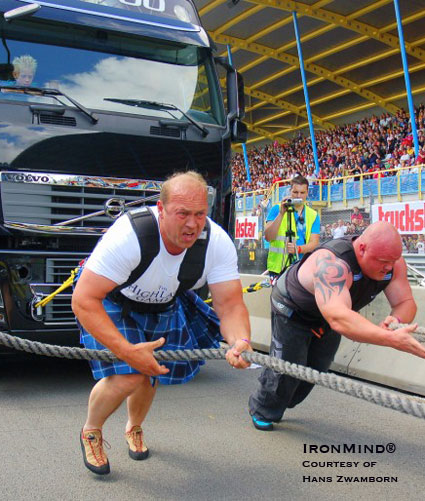 Here is the report.

Before a crowd of 12,000 spectators Wout Zijlstra pulled a truck, using a harness and rope, together with “rookie” Jan Wagenaar (3rd at the Dutch Strongest Man competition 2009).  The two strong men pulled a 100,000 kg combination over a distance of 12 meters.  The target was 10 meters and they did 12!

Wout has planned to attempt this new world record with his colleague and strongman friend Jarno Hams, but as we know, Jarno tore his muscle from his leg during the Strongman Champions League in Holland earlier this year.  But rookie Jan "The Red Hulk" Wagenaar (32 years old and 135 kg) did the job for him!