Tel Aviv—Ivan Markov (Bulgaria) delivered world class results in the 85-kg class at the European Weightlifting Championships as he won all three gold medals and looked good for even bigger numbers. 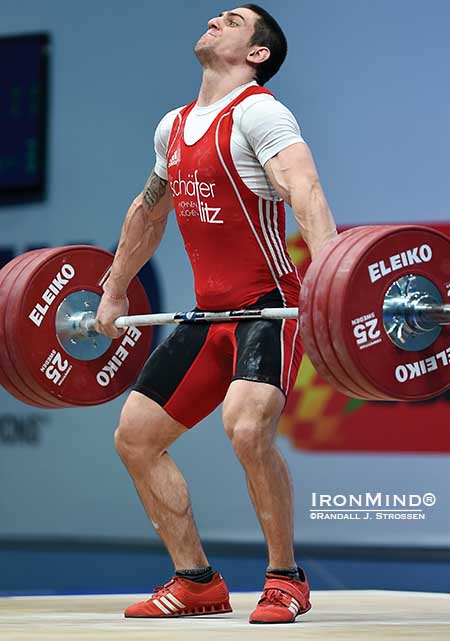 Ivan Markov (Bulgaria) is about to flip the switch and explode on this 175-kg snatch as he delivered a world class performance in the 85-kg class at the 2014 European Weightlifting Championships in Tel Aviv.  IronMind® | Randall J. Strossen photo


This class featured the young Russian Adam Maligov, France’s Benjamin Hennequin who is always a factor in the clean and jerk, and the Bulgarian Ivan Markov, who proved he’s a man to be contended with for top honors in the 85-kg class.

The snatch is not Hennequin’s best lift, but he made nice successes with 157 kg and 161 kg, before missing 165 kg.  Russian teenager Maligov made three very nice attempts, ending with 171 kg, and showed why he’s a lifter to watch even more in the future—he exudes concentration as he gets set to lift and displays obvious talent that exceeds even the impressive performance he delivered here.  And then there was Markov: he doesn’t have the elegant platform presence of Maligov or the muscular physique of Hennequin, but he rips up weights approaching world record levels.

After making 170 kg on his first attempt in the snatch, he missed 175 out front on his second attempt and then came back to make it on his third attempt, for the first of three gold medals.

In the clean and jerk, Maligov made 195 kg, missed the jerk on 201 kg and then made a good lift with 202 kg on his third attempt.  Hennequin made 195 kg, 201 kg and 206 kg, proving once again that his clean and jerk is a force to be reckoned with.  Markov, once again showing his dominance, blasted through 201 kg, 206 kg and 210 kg, so considering his overall performance and the fact that he was not pushed, watch for the real fireworks later this year at the World Weightlifting Championships.