Can't make it to Europe or Asia this year, but don't want to wait for the 2008 Olympics to see some weightlifting, or maybe you're looking for a place to see how much you really can snatch or clean and jerk? 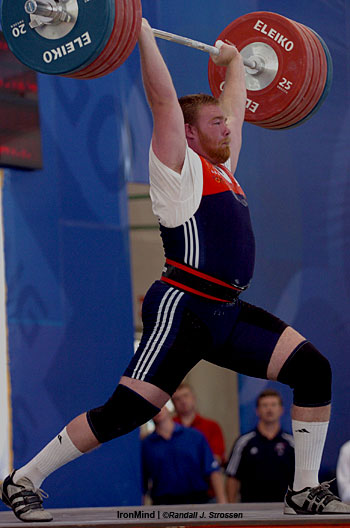 California's Casey Burgener, a favorite for the 2008 Olympic team, placed 10th at the 2006 World Weightlifting Championships, making him a superior super and the top scorer on the USA men's team. IronMind® | Randall J. Strossen, Ph.D. photo.

Thanks to Tom Hirtz, IronWorks gym and the entire Heavy Athletics crew, Oregon has had a thriving weightlifting program in recent years. In 2007, things kick off at Gene and Jon Joseph's IronWorks Gym on February 3; March 24 is the Spring Classic; April 21 is the Pacific Northwest Championships; June 2, University of Oregon/State Championships; September 22, Heavy Athletic Club Meet; October 27, Halloweenie; December 8, IronMind Open. The Spring Classic and the Halloweenie are unsanctioned, which Tom Hirtz says, "are generally for the person who has never lifted in a meet before. If you come . . . in your $300 lifting shoes . . . you don't belong in our unsanctioned meets."

Moving south, heading into California, 1980 Olympian Butch Curry, with a little help from his friends, has a full schedule lined up for the PWA (not another Palestinian group, this is the Pacific Weightlifting Association, one of the oldest and most active LWCs in the country - home of such greats as Tommy Kono . . . this is where a shy, mild-mannered guy named Bruce Wilhelm started lifting and it's the neighborhood where he still hangs his hat).