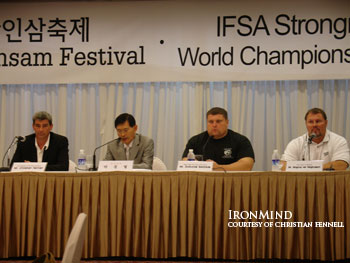 Fennell also reminded IronMind® that IFSA, in only it's third year, already has a enormous television platform, including Grand Prix events and World Championships, reaching over 500 million households and featuring over fourteen hours of strongman.

Bearing on this point of strongman as a sport, IFSA's Marcel Mostert, told IronMind® that the competitors for the IFSA World Championships had to qualify via a system of national and continental championships, rather than simply being picked. The bottom line, according to Mostert, is that there is no question that IFSA has stronger competitors than World's Strongest Man.

"Just look at our world records," Mostert said, to reinforce his point about performance levels. Mostert also mentioned the IFSA standardized equipment designed by Jamie Reeves, used to ensure that the same apparatus is used for world records. "Come to us . . . make a world record," Mostert invited. "We will see how it goes."

We call the winner of our World Championships, "the world's strongest man," Mostert said. "Of course, the other World's Strongest Man is also a good contest."

The IFSA World Championships are set for Geumsan, Korea, September 9 - 15.