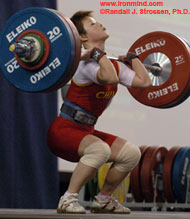 Wang Mingjuan on her way up with 118 kg, a lift that gave her the junior and senior world records in both the jerk and the total. IronMind® | Randall J. Strossen, Ph.D. photo.

After opening with 89 kg in the snatch, Wang hit a good 93-kg second attempt for a new junior world record. She made 95 kg look lighter on her third attempt, good for another junior world record. As impressive as that start was, that's all it was - a start - because Wang turned up the heat in the clean and jerk.

In addition to her other compensation, Wang picked up US$13,000 for about six minutes of lifting tonight.