Set for Wroclaw, Poland on August 12, WSMSS is hosting the final qualifying event for the 2006 MET-Rx World's Strongest Man contest. 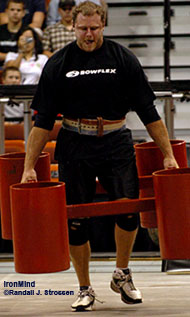 Josh Thigpen qualified for the 2006 MET-Rx World's Strongest Man contest with his performance at the WSMSS Mohegan Sun Grand Prix. Who will do the same in Poland next month? IronMind® | Randall J. Strossen, Ph.D. photo.

In addition to local stars Mariusz Pudzianowski and Jarek Dymek, the field includes Sebastian Wenta, Raivis Vidzis, Mark Felix, Robert Bolin, Phil Pfister and Ralf Ber. The events have not been announced officially, but IronMind® was told by a source close to the discussions that there will be eight events in the one-day competition.