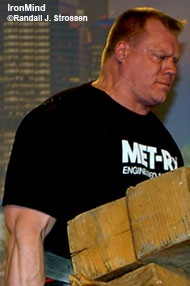 Phil Pfister, shown at the 2006 Arnold, is considered a favorite for a top place at this year's MET-Rx World's Strongest Man contest, and this weekend he has a chance to qualify for that premier strongman contest. IronMind® | Randall J. Strossen, Ph.D. photo.

WSMSS founder Ulf Bengtsson told IronMind®, "We are very happy to come to Poland, the home turf of Mariusz Pudzianowski." Expecting a big crowd to support their idol, Bengtsson added, "We are very excited that Phil Pfister will be there and we expect a great performance from him. Phil is there to qualify for World's Strongest Man."

Counting the upcoming Poland Grand Prix, Bengtsson said this year's WSMSS has included 38 different athletes, with the top performers qualifying for World's Strongest Man; but not content to rest on his laurels, Bengtsson added, "We are already planning for next year."