The MET-Rx World's Strongest Man Super Series Grand Prix didn't just kick off the race to the 2005 WSM title: It showcased Mariusz Pudzianowski, and was also a coming out party for Jesse Marunde. 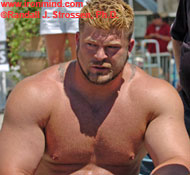 Looking serious, Jesse Marunde might be thinking, "If I win the next event . . . ." Regardless, after making a huge splash at the contest in Venice, California, Marunde went on to cap off his great year with a second-place finish at the MET-Rx World's Strongest Man contest. Tune in tonight if you want to see how it all began. IronMind® | Randall J. Strossen, Ph.D. photo.

Marius Pudzianowski is sometimes described in otherworldly terms, and anyone looking for something exceptional was not disappointed by his performance at Muscle Beach, but Mariusz wasn't the only guy getting a lot of attention: Jesse Marunde caught a lot of eyes and from his second-place finish at the Muscle Beach contest, it was a straight line to his dazzling second-place finish in the 2005 MET-Rx World's Strongest Man contest.

Airing tonight at 8:00 pm Eastern time on ESPN2, the coverage of the MET-Rx Grand Prix from Venice, California has an added bonus, with vignettes on Frank Zane, as well as the history of Muscle Beach, and if you want to see footage of Odd Haugen winning the 1968 Mr. Norway title, rumor has it that it's in the show, too.

Coverage of the Nautilus Grand Prix follows on ESPN2 at 9:00 pm Eastern time. Please confirm all times with your service provider, as they may vary.