Sanya, China - After the first day of the finals at the 2006 MET-Rx World's Strongest Man contest, Mariusz Pudzianowski leads, but the day ended with Phil Pfister dominating the overhead stone lift, to move into third place, one-half point behind Mark Felix. 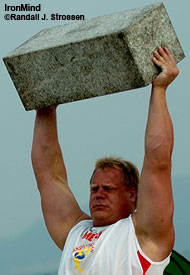 Phil Pfister nails the fourth and final stone, the only competitor to get past the second stone. IronMind® | Randall J. Strossen, Ph.D. photo.

Earlier, the power stairs had also proven to be a tough event that produced a lot of torn calluses and bloody hands. 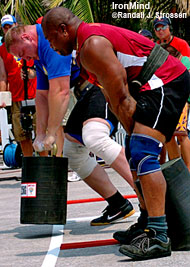 Tarmo Mitt nips Mark Felix at the line, to win his heat in the power stairs and finish second overall in the event. IronMind® | Randall J. Strossen, Ph.D. photo. 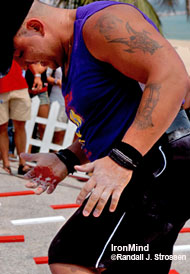 Raivis Vidzis finished the power stairs with badly ripped calluses and a very bloodly hand, but he taped up and went on the next event. IronMind® | Randall J. Strossen, Ph.D. photo.

At the finish of first day of the finals, with three events under their belts, here are the overall positions and points: