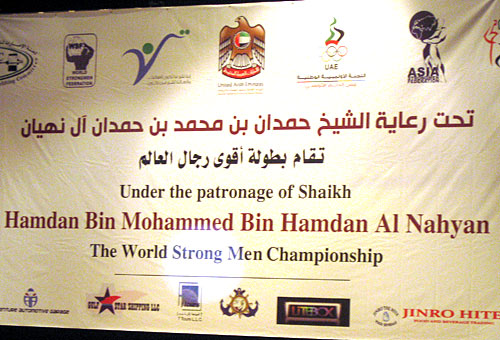 Unlike the report that this contest being misrepresented as being World’s Strongest Man, the banner at the opening ceremony clearly displays what organizer Vlad Redkin says is the contest’s  actual, official name: WSF World Strongmen Championship 2012 in Abu Dhabi under the patronage of His Highness Sheikh Hamdan Bin Mahammed Bin Hamdan Al Nahyan.  IronMind® | Courtesy of WSF.


Faced with the black cloud from the unauthorized use of IMG intellectual property related to World’s Strongest Man (WSM), Redkin told, IronMind, “About WSM, I don’t understand the reaction,” and countering IronMind’s guess that this use might have arisen from a mistranslation of a closely parallel name used on the ASF website (World’s Strongest Men), Redkin said, “Please about ASF is not right; one man used on his personal Facebook page only.

“I am confused: We didn’t use and will not use their logo and name.

“I phoned to WSM and told them, that we have our own name!

“We are working with the official PR manager of Sheikh’s administration, and they didn’t send any official press release using WSF [WSM?] name.  The official name of our competition is: WSF World Strongmen Championship 2012 in Abu Dhabi under the patronage of His Highness Sheikh Hamdan Bin Mahammed Bin Hamdan Al Nahyan.

“We cannot comment any publications from people which are not connected with our team!,” Redkin said.