“In the same weekend as the Strongman Champion League finals, we did in Kiev the 105-kg Strongman World Championships,” Marcel Mostert reported to IronMind. 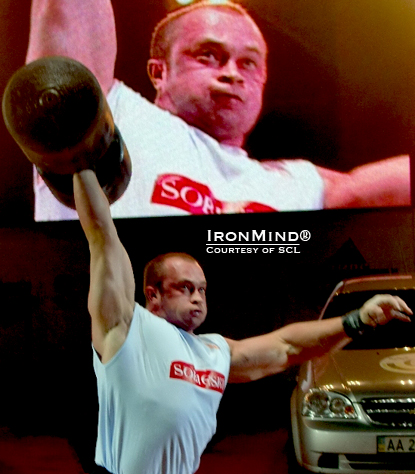 
“[It was] a very exciting contest until the bitter end, where Vitaly Gerasimov from the Ukraine and Aleksander Mancerov from Russia had equal points until the last event, the car squat for reps.
“Mancerov did an outstanding performance with 14 reps, but on his right side, at the same time, Gerasimov managed to push out 16 reps and won the title World Strongest Man 105 Kg.
“Topi Fridtfeld from Finland surprised everybody and finished as 3rd place overall.

“There was also a worldrecord: Vitaly Gerasimov did an impressive 12 reps with [an] 80-kg dumbbell.  This is the same dumbbell as used in the SCL Finals and with same measurements as on the Arnold Classic,” Mostert said.

“Many thanks to the organization UFSA, Olena and Vladimir Kiba, who made a perfect show in cooperation with SCL,” said Mostert.

“We will be back next year for sure, but then hopefully without loads of snow.”

For more details on SCL, please visit their website. 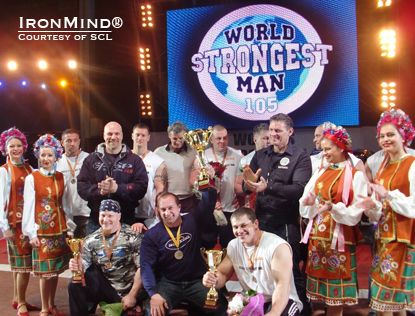 Fierce winter weather was no match for the competitors and officials who made their way to Kiev, Ukraine last weekend for the Strongman Champions League 105-kg World Championships.  IronMind® | Photo courtesy of SCL.