His father, Svend Karlsen, has won the World's Strongest Man contest, his mother, Lene Karlsen, is the world-famous MILO® author, and now that Dad is running the Viking Power empire and Mom is heading back to school, looking to add the title Dr. to the front of her name, guess who needs a nanny? 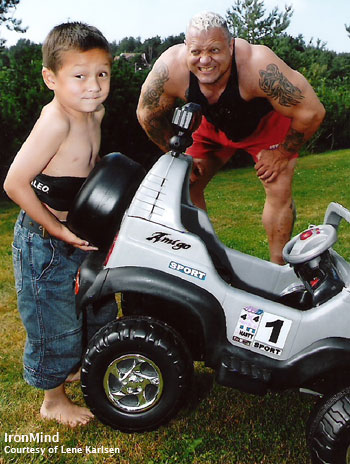 Svend Alexander Karlsen, aka Mini Viking, gives his car a little air time while his dad, Svend Karlson, 2001 World's Strongest Man winner, cheers him on. Looks like Mini Viking is having an easier time of it than Maxi Viking. IronMind® | Photo courtesy of Lene Karlsen.

"Like to spend a year abroad in the Viking land, and living with the Viking family of Svend Karlsen?," asks Lene Karlsen.

"Starting January/February 2008, the Viking family of three is looking for a female au pair, age 19-25 years old. MUST have driver's license. It will be an advantage if you are interested in strongman and sports in general, but this is not a must! If you are interested, please email us at wsm2001@losmail.no."