Count him as the first Belarusian to make the Red Nail Roster: Vadim Leles has just been certified on IronMind’s Red Nail, a worldwide bench mark of short steel bends. 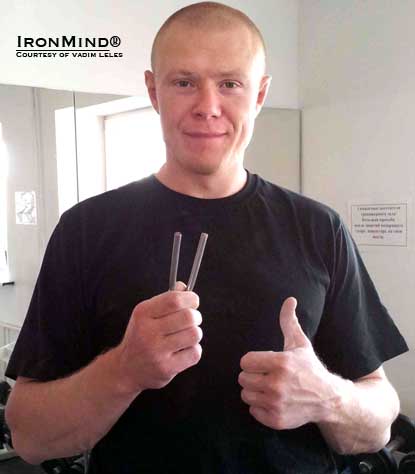 Vadim Leles has made history as the first man from Belarus to certify on the IronMind Red Nail.  IronMind® | Photo courtesy of Vadim Leles.


“About Red Nails and bending I learned from the Internet, and began conventional bending nails and rods of various grades of steel. I bend once or twice a week three nails, every day I training with a hammer and do isometric exercises,” Seles told IronMind.  He added that his training also includes “a variety of devices to grip.

“I only do barbell bench press, squat and deadlift, which is my favorite move.  Role models are athletes past and present.”

Congratulations, Vadim Leles—you have been certified and your name has been added to the Red Nail Roster!  Many thanks for Vlad Redkin of the World Strongman Federation for serving as Vadim’s referee as well as to Chris Sheehan of IronMind for quietly persisting in making the arrangements necessary for Vadim’s attempt to officially bend an IronMind Red Nail.