Commenting on yesterday's announcement from Fortissimus World Strength, top professional strongman Travis "Texas Stoneman" Ortmayer told IronMind®, "I just read the article and all I can say is WOW!"" 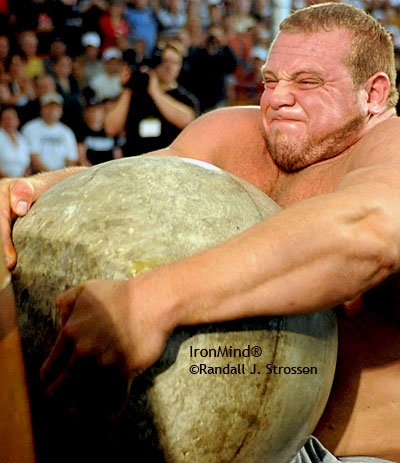 Things didn't go according to plan for Travis Ortmayer at Fortissimus 2008, but don't think he left with anything but the highest praise for the contest and its hosts. IronMind® has a feeling that the Texas Stoneman will be back with a vengeance in 2009. IronMind® | Randall J. Strossen photo.

Originally, Monsieur Ohl came out in true French-Canadian fashion and stated, almost arrogantly, that "'Fortissimus would be the greatest contest of all time.' Well, the way these people work on their show year round speaks volumes about their will to make that statement a reality," said Ortmayer.

"Fortissimus was right up there with the best contests I have ever competed in, and now that they are putting all the proceeds back into the prize purse, well, that should bring up everyone's game!

"I for one can't wait to return to Quèbec and improve upon my sorry fifth place finish from last year!"

And to give added impetus to yesterday's statement and Ortmayer's sentiments, Fortissimus World Strength has reinforced its position regarding prize money: "The decision with regards to investing all profits of the sales of the 2008 FORTISSIMUS DVD and the broadcast TV rights will be a recurrent policy of the corporation, which has also set the principle that 50% of the current budget of the competition will be alloted to prize money," Fortissimus president Paul Ohl told IronMind®.

At this rate, 'Plus de bonnes novelles de Quèbec,' will become a universally understood phrase in the strongman world.