It was a big first day at the 2011 ASC US National Strongman Championships contest and American Strongman Corp’s Dione Wessels gave IronMind a top line report. 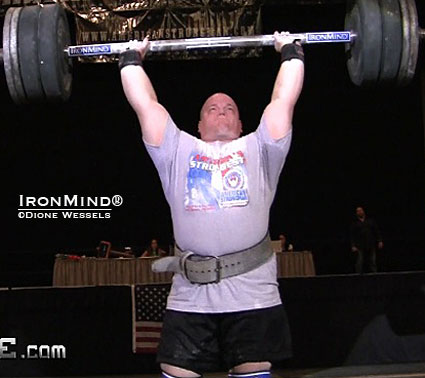 Scott Weech hit this big 423-lb. lift on the IronMind Apollon’s Axle in the first day of action at the 2011 ASC US National Strongman Championships yesterday.  IronMind® | Photo courtesy of Dione Wessels.


“We started the evening with the IronMind max axle.  Scott Weech gets 423 pounds on his second attempt.  Many guys tried close to 400 but failed.

"The fourth event of the day was brutal for all but the fans loved it!  The Chevrolet car wheelbarrow.  Only three guys could finish it and Travis was one of them.  He won the event in 29.22 secs.

"The top six standings after day one are:

“We start today at 1 p.m. [CST].  The events today are the Keg Toss, Push-Pull Medley, Chevy Car hold for time and Atlas Stones," Wessels said, so the curtain is about rise at day two of the ASC US National Strongman Championships.