Doha, Qatar - If you hadn't noticed, the women have been lighting up the World Weightlifting Championships, but for all the excitement they have generated so far, it was a whimper compared to tonight. 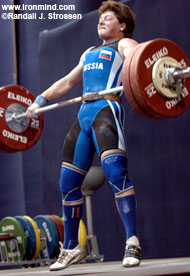 To set the stage, there were four top juniors in the class: Natalia Zabolotnaya (Russia), Liu Chunhong (China), Svetlana Podobedova (Russia), and Nahia Ramadan (Egypt), and at the other end of the spectrum, there was 33-year-old Nora Koppel (Argentina).

Zabolotnaya ripped 123 kg overhead on her first attempt in the snatch, but then had to sprint forward to save the lift, which she did. Liu uncorked a machine-like lift with the same weight for her second attempt, having smoked 118 on her opener, and Podobedova, who had already racked up good lifts with 118 and 121, hit 124 on her third. By now, only the dead weren't sitting on the edge of their seats.