It’s commonly known as the Pleasanton Highland Games, or just Pleasanton, but whatever you want to call it, the U.S. Invitational Heavy Events Championships presented by the Caledonian Club of San Francisco is a topflight competition in the Highland Games world and this year promises to build on that tradition. 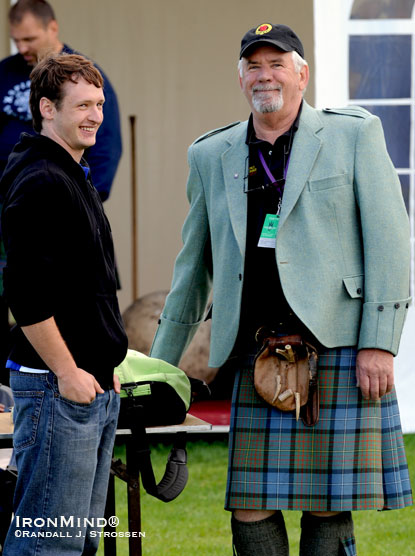 Steve Conway (right) is typical of the world-class organization you will see at every level at the U.S. Invitational Heavy Events Championships. Here, Steve relaxes before another day of officiating at the 2009 World Highland Games Championships in Edinburgh, Scotland. That is Steve’s son, Ryan, on the left and Bill “Full Sterkur” Crawford in the background. IronMind® | Randall J. Strossen photo.

David Webster, president of the IHGF, announced today the athlete lineup for Pleasanton, California, which will be the second venue in the IHGF World Highland Games Super Series.

Steve Conway, athletic chairman of the Caledonian Club of San Francisco (CCSF) and one of the world’s top Highland Games judges, said that 2010 promises to be an exciting year for the CCSF’s 145th Annual Gathering and Games:  “We were proud to be selected as one of the host games for the new IHGF Pro World Series.

“The Caledonian Club of San Francisco would like to take this opportunity to thank the IHGF and its principals, David Webster, OBE, Francis Brebner and Ryan Vierra, for presenting us with the opportunity to stage these prestigious events at our 145th Annual Gathering and Games.”

The Games will be held on Labor Day weekend, 4 - 5 September 2010, at the Alameda County Fairgrounds in Pleasanton, California.