Doha - Coming into the Asian Games, Pawina Thongsuk (Thailand) held the world records in the snatch and the total - today, she left with the gold medal in the 63-kg class, along with the world record in the jerk. 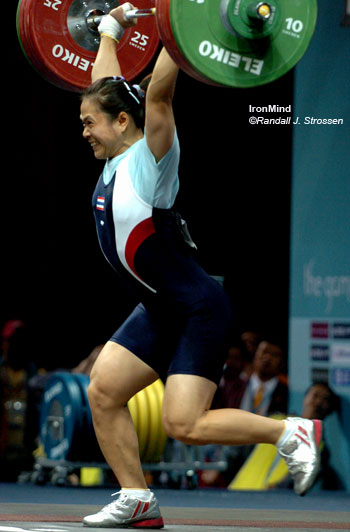 She's not showboating: Pawina Thongsuk chases 142 kg to the front edge of the platform at the Asian Games today - she made the lift, for a world record, as she won the gold medal in the 63-kg category. IronMind® | Randall J. Strossen, Ph.D. photo.

This class promised and proved to be a battle between Ouyang Xiaofang (China) and Thongsuk. Thongsuk was first out in the snatch, with a strong 105-kg opener. Ouyang followed with an easy 110-kg first attempt, and then Thongsuk answered with the same weight on her second attempt. Ouyang had 115 up and down, in and out, for no lift on her second attempt, and then Thongsuk got brushed in back of the neck as she missed the same weight on her third attempt. Ouyang finished off the snatches with a good lift with 115 for her third attempt.

Ouyang opened first in the clean and jerks, with a nice 132 - the clean looked very easy and the lift put her in first place position. Thongsuk opened with the same weight, going for second-place position, and she staggered forward to save the jerk, working to save the lift. Ouyang took 137 on her second attempt and she collapsed on the jerk, apparently injured. Thongsuk took 137 on her second attempt, going for the gold medal position and while she had to walk forward to save the jerk, the attempt looked better than her first one. Ouyang did not come out for her third attempt, and you could see her knee bandaged as she hobbled around the warmup room. On her third attempt, Thongsuk, gold medal in hand, called for a world record attempt in the jerk of 142 kg. She cleaned the weight strongly, and once she drove the bar up for the jerk, it was off to the races, as she ran to the front edge of the platform, chasing the bar and trying to save the lift - which she did. Thongsuk finished with a 252-kg total, Ouyang had 247, and Faw Thaw Yae (Myanmar) made 227.