Doha, Qatar - It was all about Pawina Thongsuk (Thailand) in the women's 63-kg category at the World Weightlifting Championships today. 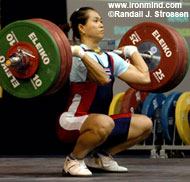 With three gold medals and world records in the snatch, clean and jerk, and total already in hand, Pawina Thongsuk took 145 kg on her third clean and jerk, minutes after she had broken the world record with a lift of 140 kg. IronMind® | Randall J. Strossen, Ph.D. photo.

Of the medalists in the snatch, Liu Xia (China) opened first, with a very easy 97-kg lift, and she made another good lift with 102 kg on her second attempt. Olympic gold medalist Pawina Thongsuk stuck 105 on her first attempt and Svetlana Shimkova (Russia), who was expected to push for top honors in the snatch, took the same weight for her first attempt, too, but she missed it and then came back for a strong success. Liu followed with a very smooth second attempt with the same weight and Shimkova answered with a nice 108. But now that everyone else was done, Thongsuk went to work, and with a lot of support from the crowd, she snatched 110 kg with the smooth up and down movement of a piston. That must have been just the warmup that she needed, because she capped off her snatches with a silky smooth 116-kg world record.

Liu opened first in the clean and jerks, too, with an easy 128-kg lift, noticeably jumping back on the clean. Shimkova took 132 on her first attempt and looking very strong, punched it overhead, but the longer the bar stayed overhead, the shakier she got, although she hung on for a good lift. Liu showed her fast footwork when she jerked 133 on her second attempt, even though she had to do some work to stand up with the weight.

But Thongsuk wasn't done, and she made a nice lift with 140 kg on her second attempt, although she had to work and walk to control the jerk - her effort gave her the world record in the jerk as well as the total, not to mention locking up all the gold medals in her class.

If that weren't enough for the night, Thongsuk called for 145 kg on her third attempt, made a nice clean and came close to jerking the weight.