Svend "Viking Power" Karlsen told IronMind that Pro Strongman Norway is an organization "by the athletes and for the athletes." 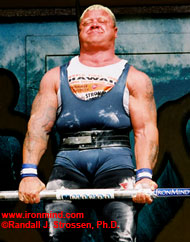 "We don't organize events . . . we just choose athletes" for international competitions explained the World's Strongest Man winner. "World Strongest Man Super Series and World Strongman Cup - they will work with us," Karlsen said, referring to two highly visible organizers of strongman competitions. Rather than restricting the movement of its athletes, Karlsen said that members of Pro Strongman Norway can compete when and where they choose: "We are just an umbrella organization," said Karlsen.

Although he said that he preferred not to mention specific names, Karlsen said that the international response to this sort of idea - a strongman federation run by the competitors themselves - has been very positive.