World Class Events founder Ulf Bengtsson told IronMind today that the World's Strongest Man Super Series is "a competition machine," and that he feels the successes enjoyed this year have established it as "prime, level one worldwide." 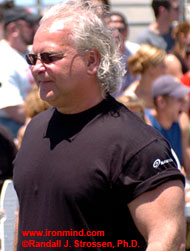 Returning to the scene where he was a bodybuilder in his youth, Ulf Bengtsson was on hand for the MET-Rx Grand Prix, the first event the 2005 World's Strongest Man Super Series (Venice, California). IronMind® | Randall J. Strossen, Ph.D. photo.

Bengstsson is wrapping up the first year of his alliance with TWI which created a series of grand prix strongman events, culminating in the MET-Rx World's Strongest Man contest. Bengtsson is quick to praise TWI and describes the joint efforts as a win-win situation with even more potential for future development.

Looking toward 2006, Bengtsson said that the goal of the World's Strongest Man Super Series is to hold grand prix strongman events in the US, Europe and Asia, and he said that China, host of the 2005 WSM contest, is likely to be the Asian location. Bengtsson also said that he is very happy with the feedback he has received on the WSMSS shows which aired on ESPN2 last week - a further indication of what has already been achieved in 2005.