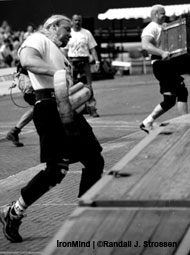 In July, Magnus will be competing in Norway and in Moscow, before returning home for Sweden's Strongest Man. Magnus said that he also would like to squeeze in a couple of World Strongman Cup contests, as well, before hopefully heading off to a great performance at the 2006 World's Strongest Man contest.

Magnus said that he will be competing at a somewhat higher bodyweight this year and that while he has cut his training volume, he is heavier and stronger, despite a very hectic schedule that includes seminars and TV commercials. Grip guys will be happy to know that Magnus said that he can still close a No. 3 Captains of Crush® Gripper virtually any time.

Torbjorn Samuelsson - who is getting married later this year - is also is training hard, and while injuries have held him back in the past, Magnus said that Torbjorn is doing very well and that he is hoping for a big year in strongman this season.