Calling for what is described as an essential step forward in the sport, the leaders of the European Weightlifting Federation - president Antonio Urso and general secretary Marino Ercolani Casadei - have presented their thoughts in the upcoming issue of European Weightlifter magazine and IronMind® was given an advance copy of their editorials. 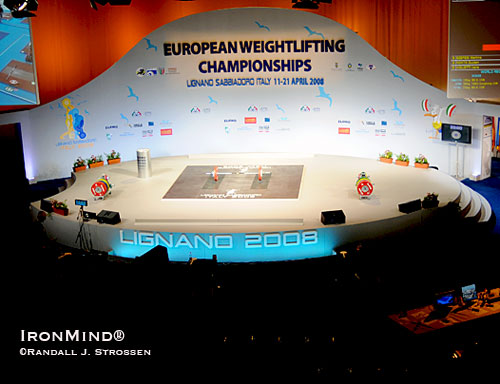 The 2008 European Weightlifting Championships (Lignano Sabbiadoro, Italy) were a sight to behold: nary a straight line to be found on stage, where curves danced instead, and rather than the usual miserable lighting, the stage was bright while the surrounding area was dark.  Drama had come to weightlifting and in the September 2008 issue of MILO, Randall Strossen wrote, “What the EWF accomplished can hardly be overstated,” in an article entitled “Best Staging, Best Lighting . . . The New Look of Weightlifting.”  IronMind® | Randall J. Strossen photo.


“Positive” is a word with the wrong connotations in the sport of weightlifting, but when it comes to being a change agent, positive is exactly what one would hope for if you thought the sport had not yet fully realized its potential - or, worse, if you thought the sport was one step above requiring life support.  That is the context for these editorials:  change is being called for in very specific areas, and the EWF leadership explains both why this is essential and why it should not be seen as threatening.

Weightlifting is an ancient sport with a glorious tradition and nobody has embraced this richness, with its deep roots in art, better than Marino Ercolani Casadei.  Thus, it is of special note that Mr. Casadei has been in the vanguard of recent calls to take the sport into the 21st century, beginning with basic reforms in even such routine business tasks as accounting and budgeting.

Together with EWF president Antonio Urso, Mr. Casadei is forging a new vision of weightlifting - calling for it to migrate from a stagnant sport bogged down by its timeworn approach to one that can actively explore new ways to bring the sport forward.  The message is that it is time for the dynamic essence of the sport itself to be reflected by how the sport is managed and by how it is presented to the public.

Noting that, “Europe has always been a forerunner of great change in every aspect of weightlifting,” Dr. Urso outlines some of his organization’s recent successes, which are both significant and broadly based.

The EWF, Dr. Urso explains, has been in the vanguard of establishing rules of financial management that are consistent with professional standards, noting that this was crucial to ensure financial transparency.  This transparency, in turn, is essential for informed management and is also consistent with International Olympic Committee standards, Dr. Urso would point out.

Further, the EWF, working with the European Broadcasting Union (EBU), has brought new levels of visibility to the sport, with a recent doubling of television viewers - living on three continents - who watched the Senior European Weightlifting Championships.  Dr. Urso also touches on EWF initiatives in the area of coaching, which he says are fundamental not just for the progress of the sport, but also in the fight against doping.

But when one seeks to change the status quo, Dr. Urso explains, it can be perceived as threatening, and this can lead to misunderstandings or to outright attacks aimed at the innovator - a situation that now exists in weightlifting, Dr. Urso says.

Yet, rather than dwelling on these misunderstandings, both Mr. Casadei and Dr. Urso present the view that the successes of their approach are evident.  Instead of being distracted by any unwarranted criticism, their intention is to stay focussed, bringing more of what they see as much-needed improvement to weightlifting, a sport that Dr. Urso says “is in dire need of reform.”